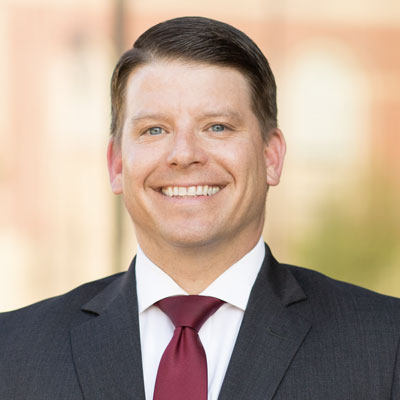 A tried and tested criminal trial attorney, Andrew uses his extensive experience and advocacy skills in the courtroom to obtain the best possible result for your case.

Originally from Portland, Oregon, Andrew graduated from the University of Oregon in 2003. Following a call to public service, Andrew enlisted in the United States Navy in 2004. During his enlistment, Andrew served onboard the USS Essex (LHD-2) for 4 and a half years. Much as it is now with his clients, his job then was to protect his ship and his crew. Andrew met his wife, a native Houstonian, during his service. After serving on active duty for 5 years, Andrew received an honorable discharge and pursued his passion for the law.

Andrew was admitted to the Oregon State Bar in 2013 and began working for the Benton County District Attorney’s Office in Corvallis, Oregon, in 2014. During his tenure at that office, Andrew reviewed hundreds of felony and misdemeanor criminal cases, decided whether there was enough evidence to prosecute those cases, and tried over 25 jury trials. Andrew also presented over 50 cases to the grand jury for indictment. As his experience grew, he was looked to as a resource by his peers for impaired driving cases and served as an instructor for the Oregon District Attorneys Association’s 2019 training “Prosecuting the Drugged Driver” and 2020 training “Protecting Lives, Saving Futures” for prosecutors and law enforcement from across the state of Oregon. Andrew also volunteered as head coach for the Oregon State University Mock Trial team.

In 2020, Andrew and his wife decided to move to Houston to be closer to family. In December of 2020, Andrew began working for the Harris County District Attorney’s Office as an assistant district attorney. He initially prosecuted misdemeanor cases but quickly rose in rank and was assigned to prosecute felony juvenile cases. Impressed with Andrew’s preparation, zealousness and advocacy, Neal asked Andrew to join the Neal Davis Law Firm as a lawyer.

Andrew is a fighter with the practical knowledge and trial experience to provide the accused with the best defense possible. In his spare time, he enjoys spending time with his family, coaching football and experiencing all that Texas has to offer.