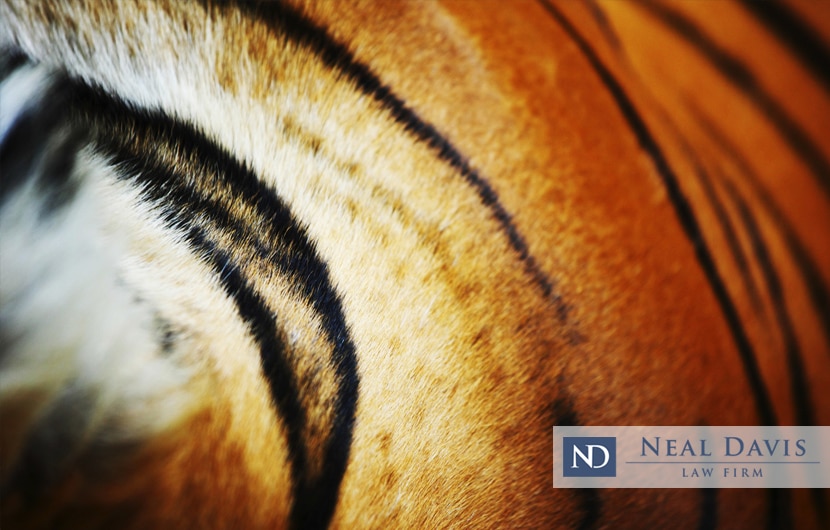 The sensational footage of a tiger briefly roaming a Houston neighborhood has led to national news media coverage on CNN, CBS, Today and elsewhere. Now that the tiger has been found and any perceived threat is over, you may wonder what charges may be involved in the notorious case.

Texas law on exotic animals allows local governments—cities and counties—to regulate the ownership of such animals. In other words, owning exotic animals is all right with the state, as long as it’s approved by local authorities.

However, Texas law does require that the owner of such animals register them with a city or county’s animal control offices. Texas law also requires that people get a permit to buy, sell or possess any animal which could be dangerous. That includes tigers as well as lions, bears, chimpanzees, cougars and coyotes.

Though it may be legal to own certain exotic animals in some cities or counties in Texas, in Houston it is illegal to house an exotic animal such as a tiger unless it is in a nationally accredited zoo, such as the Houston Zoo.

City of Houston law on exotic or “wild” animals holds that harboring an animal that could be dangerous is a misdemeanor crime. Punishments can include a fine of at least $500 and up to $2,000 for each wild animal possessed and for each day it is possessed.

Even dog owners can be criminally charged in Texas

Texas law is strict when it comes to dangerous animals—including a dog—that can attack a person and cause injuries or death. In such cases, the owner could face a criminal charge.

According to the Texas Health and Safety Code, the owner of an animal in Texas which attacks someone unprovoked at a location away from the owner’s property can be charged with a felony crime. Failing to secure the dog or other animal is considered criminal negligence.

No charge yet regarding Houston tiger

In the case of the first loose and then missing 9-month-old male Bengal tiger named India, no one was injured. In fact, after the tiger was briefly spotted outdoors on May 9, it wasn’t seen again until one of its alleged owners turned in the tiger to authorities. She faces no charges yet, according to Houston Police.

However, her husband faces several charges, not all of them related to the tiger case.

Recently he had been out on bond on a 2017 murder charge in Fort Bend County and on a separate charge of evading arrest earlier this year in Austin County.

When the loose tiger was first noted May 9 on a lawn in a Houston neighborhood, he allegedly retrieved the tiger and drove away with it despite admonitions from a nearby off-duty officer to remain at the scene. That led to his arrest the next day for evading police.

As for the tiger, India was unharmed and in good condition when delivered to Houston Police. Animal Control officials say they will transport him to the Cleveland Amory Black Beauty Ranch, an animal refuge in Murchison, Texas, southeast of Dallas.

There, the tiger will live in his own habitat by himself for a time, but later he may be introduced to other tigers at the ranch.

If you face a criminal charge in Houston, Sugar Land, The Woodlands, Conroe or elsewhere in Harris County, Fort Bend County or Montgomery County, contact experienced and award-winning attorney Neal Davis. We can arrange a consultation for your case.