Call Now  (713) 227-4444 Email Us Hablamos
Español
Home / Drug Crimes / What Are the Penalties for Manufacturing Illegal Drugs in Texas? 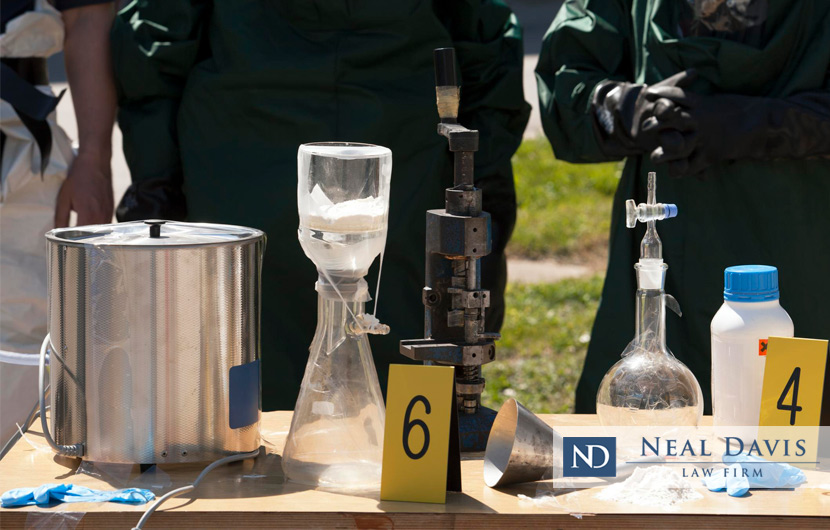 Did you know you could go to prison for the rest of your life for manufacturing illicit drugs such as meth, cocaine or fentanyl  (which is especially popular in illegal drug labs since it’s so easy to manufacture)?

Indeed, federal and Texas punishments for manufacturing illegal drugs can be severe — even more than for simple possession of such drugs, which are considered controlled substances.

For this reason, it’s imperative you understand the consequences and know your legal rights.

What is drug manufacturing?

“Drug manufacturing” can mean many things. Among them are producing or “cooking” methamphetamine, mixing chemicals to create LSD and, in federal cases, growing marijuana plants.

It’s also illegal to provide someone with the chemical components to manufacture illegal drugs if you should know that such elements are necessary to make such drugs.

For instance, under the Texas Controlled Substances Act, it’s illegal to possess phenylacetone and methylamine together with the intent to manufacture meth.

Even the packaging or repackaging of an illegal drug, or the labeling or re-labeling of its container, can be deemed an aspect of drug manufacturing.

In short, if you are involved in any step of the drug production process, you can be charged with manufacturing an illegal drug, also known as possession with intent to manufacture.

Texas penalties and punishments for manufacturing a controlled substance depend on the amount of the drug and the category under which it falls. The most addictive and damaging drugs bring the most severe charges and punishments.

Other circumstances can also increase punishments, such as when children are present or when violence occurs related to drug manufacturing.

Under Texas law, manufacturing or delivery of a controlled substance can lead to a maximum penalty of up to 99 years in prison and a fine of up to $250,000.

A lesser offense of what’s known as a state jail felony still can carry punishment of 180 days to 2 years in jail and a fine of up to $10,000 — and that’s for less than 1 gram of an illegal drug.

Many other punishments involving fines and jail time fall in between.

Under federal law, conviction of manufacturing a controlled substance can lead to a fine of up to $50,000 and up to 7 years in prison. Again, the amount of the drug involved is a factor in punishments, with lesser amounts leading to lesser charges and punishments.

As you can see, being charged with manufacturing a controlled substance or illegal drug is serious. If you or a loved one face such a charge, you should immediately contact a skilled, knowledgeable and experienced Texas drug defense lawyer to handle your case.

Do you need the best Houston drug crime defense attorney for a case in Harris County, Montgomery County or Fort Bend County?

Contact our law firm today for a confidential legal review of your case. We may be able to have your charge reduced or even dismissed based on the circumstances of your case, which may simply be a matter of your being in the wrong place at the wrong time, and the drugs weren’t yours. Or perhaps police made an illegal search and seizure.

In any event, keep in mind that a charge is NOT a conviction. You are innocent until proven guilty, and you have legal rights. Talk to a skilled defense lawyer who can ensure your legal rights are protected when it comes to a Texas or federal charge of manufacturing illegal drugs.