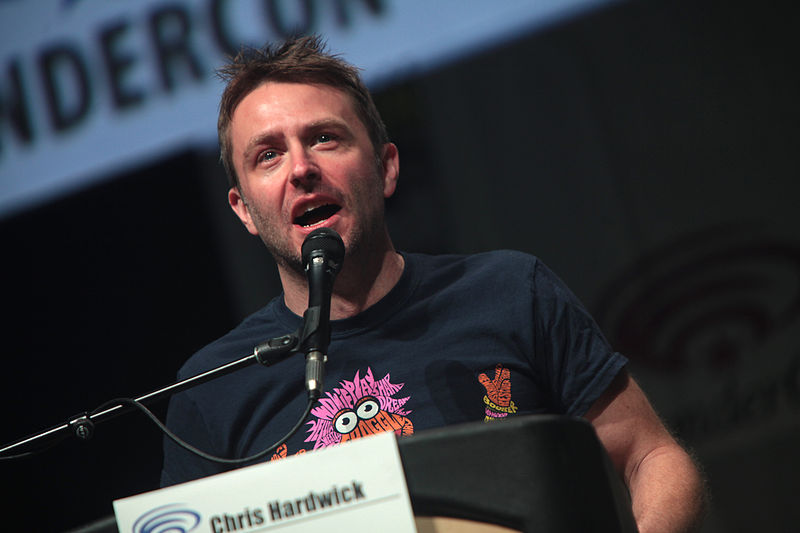 Since the #MeToo movement gained momentum, many women have accused men of sex crimes — but not all are guilty. Even so, men are quickly deemed guilty in the “court of public opinion” and by employers, long before legal due process.

Hardwick’s ex-girlfriend, actress Chloe Dykstra, wrote a thinly veiled essay for Medium claiming an unnamed ex had sexually assaulted her. Having been her boyfriend from 2011 to 2014, Hardwick was quickly targeted as the villain.

Hardwick, age 46, who’s now married to model and heiress Lydia Hearst, denied the accusations and revealed that he’d broken up with Dykstra because she cheated on him.

Even so, his show Talking With Chris Hardwick was abruptly canceled by AMC, which also airs his The Talking Dead shows after airings of megahits The Walking Dead and Fear the Walking Dead when they’re in season. Also, Nerdist, a company Hardwick founded, deleted every reference to him from its website.

In short, Hardwick became yet another ostracized male when mere accusations — not proof — confronted him.

Now, we learn that TMZ has acquired texts showing a far different situation, with Dykstra repeatedly declaring her love and pleading with Hardwick to reunite after he ended the relationship because he caught her cheating.

This, from a woman who, years later, claimed she was sexually abused by Hardwick?

The New York Post’s Andrea Peyser wrote, “The takedown of Chris Hardwick shows the #MeToo movement has gone too far.”

“It’s scary that a man can be convicted and punished without a trial or as much as a thorough hearing,” she continued. “#MeToo developed as a movement in which people might find empowerment by standing up to abusers. Now it’s being used as a cudgel for aggrieved parties to exact revenge.”

Indeed, false allegations hysteria has enabled women to exact terrible damage when they have an axe to grind, even though they weren’t assaulted. And that must end.

The American legal system has long championed the concepts of “due process” and “innocent until proven guilty.” But the #MeToo movement has trampled those concepts. Suddenly, presumption of innocence has turned into a conclusion of guilt.

At the Neal Davis Law Firm, we understand the chilling nature of false sex crime allegations. Over the last six months, we’ve successfully handled many such false claims and have prevented sex crime charges from going forward.

If you’re a victim of a false sex crime claim, contact our experienced Texas sex crime defense attorneys serving Houston, Harris County, Fort Bend County, and Montgomery County. We will use our knowledge, skill, and experience to fight for your legal rights and clear your name.

Contact us and we’ll quickly provide you with a legal review of your case. Then, if you decide you want our help, we’ll determine the true nature of the false claim made against you and how to refute it.

We agree the #MeToo movement has gone too far — and we’re ready to help. So let’s get started.