You may have heard that disgraced former movie mogul Harvey Weinstein is on trial for sex crimes in Los Angeles. But given that he’s already in prison and faces another 21 years there due to a 2020 conviction, why is Weinstein being tried again for sex crimes?

In part, that’s because of venues, since Weinstein’s previous conviction was in New York, and the current trial on sex crime charges is in California. Beyond that, Weinstein is charged with different sex crimes in his Los Angeles trial than those for which he was convicted in New York.

But the new trial in California has gained more significance in light of a recent change in New York. There, a judge in New York’s highest state court recently ruled that Weinstein, 70, could appeal his 2020 rape and sexual assault conviction in that state, according to a news report by Reuters.

Reuters said this means Weinstein has “a distant chance of being granted a new trial.”

A new trial for Weinstein?

A new trial for Weinstein would overturn and replace the New York trial that concluded in February of 2020, where a jury found him guilty of raping a former aspiring actress and also sexually assaulting a production assistant. As a result, Weinstein was sentenced to 23 years in prison.

On July 20, 2021, Weinstein was extradited from New York to California to face trial on 11 counts of sexual assault against 5 women in Los Angeles between 2004 and 2013. His trial in California began on October 10, 2022. Weinstein has pleaded not guilty to the rape and sexual assault charges against him.

According to The New York Times, the trial in California is expected to last several more weeks, with around 80 witnesses scheduled to testify.

Meanwhile, Weinstein can appeal his 2020 conviction in New York and be given the right to a new trial. A new trial would reverse the punishment to which he’s being subjected. Then, all that would stand between Weinstein gaining freedom rather than spending years more in prison is the current Los Angeles trial on different charges. 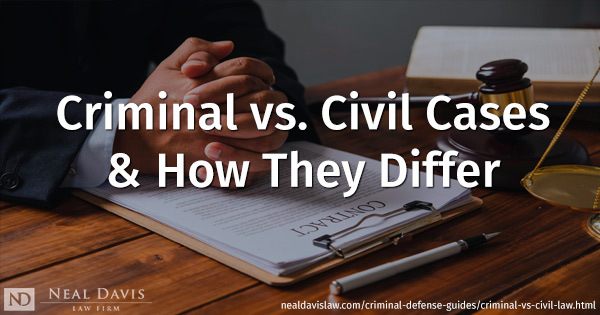 Criminal vs. Civil Cases & How They Differ

To understand how criminal law and civil law differ in Texas, you should understand the main types of offenses that prompt such legal actions and how they proceed to court.

Weinstein’s initial conviction in New York was seen as a victory for the #MeToo movement, which encourages women to speak out about being subjected to sexual abuse or sexual assault, even years after such events.

Seeing a high-profile defendant such as Weinstein or Bill Cosby be convicted has led many more women to come forward with sexual assault claims. In fact, there was a 23 percent increase in call volume to the National Sexual Assault Hotline just after Weinstein’s conviction in New York was handed down.

But among the many valid claims of sex crimes can be some false claims. While these are a minority—perhaps 2 to 10 percent according to the National Sexual Violence Resource Center—persons who are falsely accused, and thus innocent, must still defend their legal rights against false claims.

False sex crime charges can destroy your reputation and your life. Learn what you should and should not do to protect your rights if you’re accused of a sex crime in Texas.

Why are false sex crime claims made?

As for why people make false sex crime claims, that can happen for a variety of reasons.

Some persons who are falsely accused of sex crimes may face such accusations due to mistaken identity. For others, it may involve revenge due to a personal grudge of the accuser. A person may also be accused of a sex crime by an estranged spouse or partner to gain leverage in a divorce or custody dispute.

Even high school students have been known to accuse a teacher of an inappropriate or improper student-teacher relationship, perhaps as revenge for getting a poor grade or for some other motivation beyond the truth of the matter.

False accusations of campus rape have also become common, with accused students often being treated unfairly by college or university authorities who fear losing federal funding by not responding zealously to the federal Title IX law prohibiting sex discrimination. An accused but innocent student might be suspended or expelled by a school without the legal due process he or she would have had in a court of law.

Beyond that, in today’s social media frenzy, false claims of sex crimes often lead to the accused person being quickly tried and convicted in the so-called court of public opinion. This rush to judgment means some persons lose their jobs and their standings in their communities until their names can be cleared.

If you or a member of your family faces a claim, accusation or charge of a sex crime, you should promptly contact an experienced sex crime defense lawyer or criminal defense attorney to fight for your legal rights.

You must take any claim or charge of a sex crime seriously, especially given that punishments for sex crimes in Texas tend to be harsh. These can involve years in prison, high fines and perhaps being compelled upon release to register as a sex offender.

When it comes to punishments, sex crimes against children can bring the most extreme penalties.

Sexual assault of a child under 17 years old is a 2nd-degree felony in Texas. Its punishments include a prison sentence of as many as 20 years and a fine of as much as $10,000 Also, this crime has no statute of limitations. That means you could be charged and convicted of sexual assault of a child many years after the crime allegedly occurred.

Aggravated sexual assault of a child is a 1st-degree felony in Texas. Its penalties can be as extreme as life in prison. For instance, if the child involved was 14 years old or younger at the time of the alleged assault, the punishment can be up to 99 years in prison without a chance of parole until at least 50 percent of the sentence (or 49 and a half years) is served.

Persons living in Houston, Conroe, The Woodlands, Sugar Land or elsewhere in Harris County, Montgomery County or Fort Bend County can reach out to the award-winning Neal Davis Law Firm for legal help. Contact us today to arrange a consultation for your sex crime case.