Call Now  (713) 227-4444 Email Us Hablamos
Español
Home / Violent Crimes / What is a Deadly Weapon in an Aggravated Assault Charge in Texas? 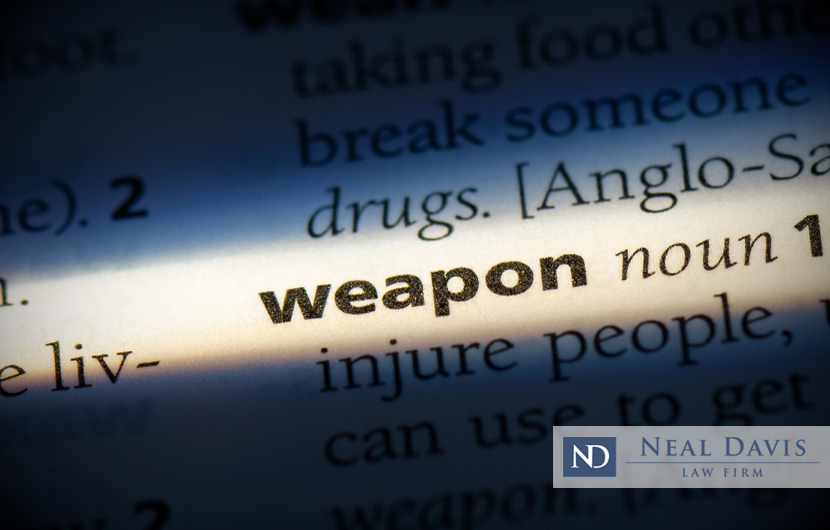 Under Texas law known as the Texas Penal Code, a deadly weapon means any of the following:

The word “anything,” used twice in the law, can include many different kinds of weapons besides firearms. And the “manner of its use or intended use” opens the definition to more things, depending on how they were used.

Besides firearms, what are deadly weapons?

Independently of Texas laws on deadly weapons, a deadly weapon could be described as being dangerous or lethal (deadly) by having the capacity to cause great bodily harm and even death.

Beyond obvious deadly weapons such as various forms of firearms or guns, such weapons could include knives, swords, spears, axes, brass knuckles, ropes or anything used for choking, cutting or stabbing. A car can also be considered a deadly weapon, by virtue of the “manner of its use.”

Such a weapon was used in 2020 by a Houston-area woman who suspected her husband of having an affair and ran over him with her car repeatedly in a parking lot. She was convicted of murder and served 15 years of a 20-year sentence before being released in 2018. The story became a TV movie in 2004 called “Suburban Madness.”

The more severe the injury, the greater chance that a court or jury will hold that a body part such as a hand or foot — not normally considered deadly — was used as a deadly weapon.

Even certain boots or shoes might be deadly weapons if applied with lethal force.

On June 9, 2013, a Rice University professor was killed in his Houston condominium when he was struck in the face and head at least 25 times with a 5½-inch stiletto heel wielded in the hands of his attacker. He reportedly had 10 puncture wounds on his head and 15 to 20 wounds on his face, neck and arms.

In what became known as the “stiletto murder,” it was discovered that his attacker was his girlfriend at the time. She was convicted of murder and was sentenced to life in prison.

Many other items can be deadly

A large rock or other blunt instruments such as a walking cane, fireplace poker, baseball bat or golf club could also be considered a deadly weapon.

In other words, even these or many other ordinary items designed for non-violent purposes can be employed as deadly weapons — and that use can elevate an assault charge to a charge of aggravated assault with a deadly weapon.

In fact, rare cases have shown that amazingly diverse elements can be construed as deadly weapons — even an image electronically sent via a tweet.

In 2017, a Texas grand jury in Dallas found that a flashing “GIF” was used as a deadly weapon by a man who sent a tweet showing such an image to Newsweek journalist Kurt Eichenwald to provoke an epileptic seizure.

Eichenwald, who has epilepsy, said he had a seizure when he received and viewed the tweet. The grand jury considered the flashing GIF in the tweet to be a deadly weapon, and the man who sent the tweet was indicted.

At the time, according to NBC News, “Experts in tech and cyberharassment law said it is likely the first time that a GIF has been deemed a deadly weapon used in a physical assault.”

What about an alligator or other dangerous animal?

If you think that’s strange, consider that in Florida a man hurled a live alligator through a fast-food restaurant’s drive-thru window and was charged with — you guessed it — aggravated assault with a deadly weapon.

Get an assault charge defense lawyer

Conviction of the crime of aggravated assault with a deadly weapon — a second-degree felony in Texas — can bring prison time of 2 to 20 years and a fine of up to $10,000. If the assault involves domestic violence, the charge can be a first-degree felony, with punishment as high as life in prison.

Contact the Neal Davis Law Firm today for a legal review of your case involving the alleged use of a deadly weapon in an aggravated assault charge.