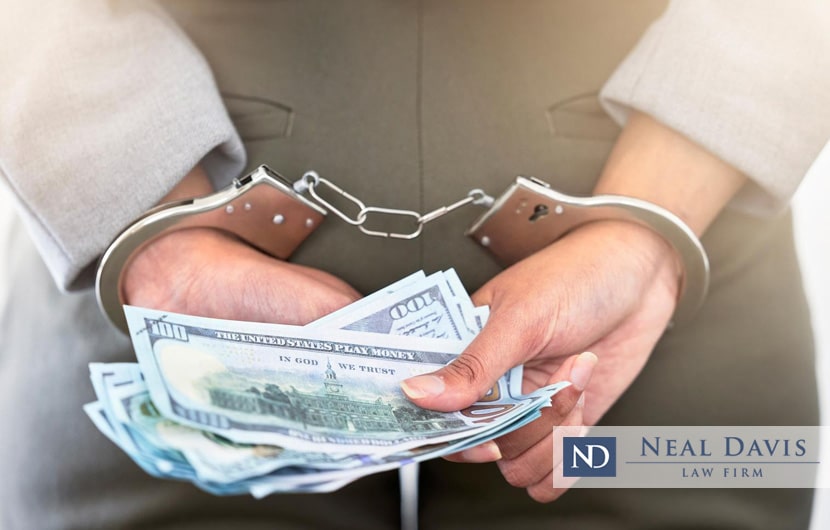 Can I get years in prison for a white-collar crime?

Being accused of a white-collar crime—or any crime for that matter—is a terrifying scenario for a number of reasons.

Not only are your job and reputation on the line, but if convicted, you face the possibility of steep fines and even prison time.

Take the case of disgraced businesswoman Elizabeth Holmes, who was recently sentenced to 11 years and 3 months in prison for defrauding investors about her company’s business dealings and technology.

Having been the founder and CEO of the failed blood-testing start-up Theranos, Holmes was sentenced on November 18 in the U.S. District Court for the Northern District of California in San Jose, California, according to The New York Times.

She must surrender to custody on April 27, 2023, and then begin serving her sentence, which will be followed by 3 years of supervised release, or probation.

Holmes will be assigned to a prison by the Federal Bureau of Prisons after it weighs elements such as prison space and location, as well as the nonviolent nature of her crime and her lack of criminal history.

Judge Edward Davila, who sentenced Holmes, has recommended she serve at Federal Prison Camp in Bryan, Texas, a minimum-security women’s facility about 100 miles from Houston. It holds 539 female inmates in 4 dormitory units on a 37-acre campus with limited fencing and lenient family visitation.

She is expected to appeal her conviction. 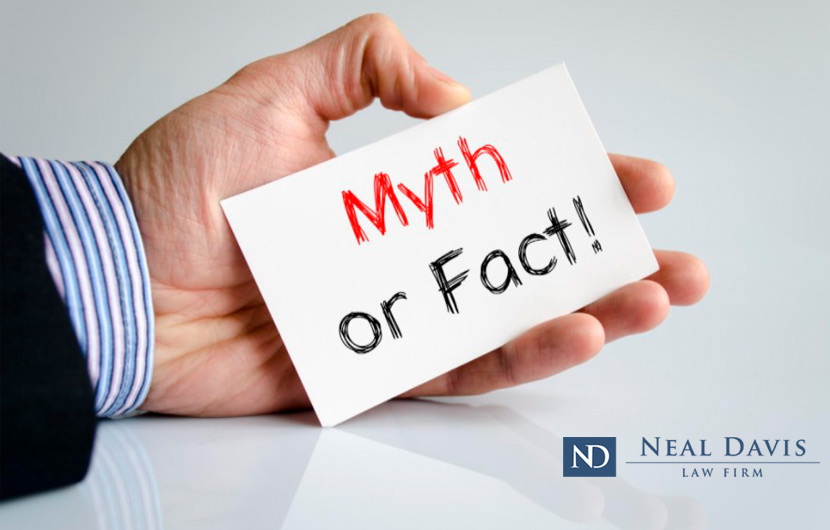 Learn about the top 5 myths surrounding appeals in criminal cases so you can understand your rights after a conviction in Texas.

Holmes had raised $945 million from investors for her start-up company, Theranos, with the promise of revolutionizing health care by means of wide-ranging blood tests that required just a few drops of blood. It was later found that she’d deceived investors with false claims.

After a high-profile trial, Holmes was convicted last January of 4 counts of fraud.

For her sentencing hearing in November, federal sentencing guidelines for fraud convictions of such scope advised a maximum of 20 years in prison. So you might think Holmes received a light sentence.

But not really. In Holmes’s case, a probation officer assigned to the case had proposed 9 years in prison. Prosecutors had sought 15 years in prison and $804 million in restitution for 29 investors. Holmes’s lawyer had asked for only 18 months of house arrest.

Holmes’s sentence of 11 years, or more than the 9 years proposed by the probation report, was intended by the court to send a message and deter others from future start-up fraud schemes.

Feds aim to crack down on white-collar crimes

The Times reported that very few executives are indicted on fraud charges, much less convicted and imprisoned. But that may be changing.

The U.S. Department of Justice is determined to be more aggressive in pursuing white-collar criminals, according to Deputy Attorney General Lisa O. Monaco.

She has said that the Justice Department’s mission “must remain the same: enforce the criminal laws that govern corporations, executives, officers and others, in order to protect jobs, guard savings and maintain our collective faith in the economic engine that fuels this country. We will hold those that break the law accountable and promote respect for the laws designed to protect investors, consumers and employees.”

She also said such accountability “starts with the individuals responsible for criminal conduct.”

Recently, that’s also included the case of Sam Bankman-Fried, founder of the cryptocurrency exchange FTX, which collapsed in bankruptcy. He is under several federal and state investigations. 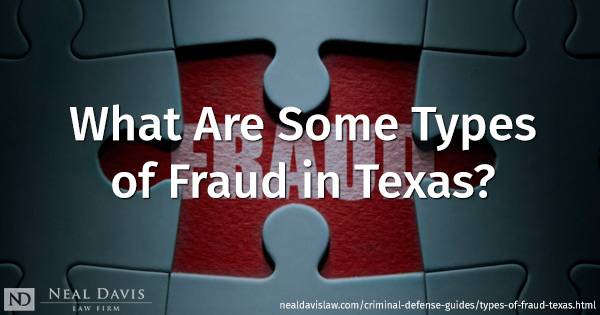 What Are Some Types of Fraud in Texas?

Think you could never be charged with fraud? Don’t be so sure. Learn about 18 different types of fraud and their harsh punishments in Texas.

Holmes created Theranos in 2003 with the goal of revolutionizing health care with better diagnoses of illnesses. Theranos reportedly had created a device that could run over 1,000 tests on a single drop of blood.

Later, this was found to be false. Such deceptions were exposed in 2015 by The Wall Street Journal, and Theranos’ lab was shut down by federal government authorities soon after that.

In 2018, Theranos was dissolved, and Holmes and her business partner, Ramesh Balwani, were indicted on fraud charges.

Last July, Balwani was found guilty of 12 counts of fraud in a separate trial. He will be sentenced on December 7.

Though white-collar crimes are nonviolent in nature and involve such things as theft, embezzlement, money laundering, bribery, counterfeiting and fraud, they are serious crimes, and they can bring severe punishments. Indeed, white-collar crimes can lead to years in prison just as surely as can violent crimes, such as assault or murder.

Such laws in Texas have led to the arrests and convictions of many people, including:

In addition to criminal charges, persons accused of white-collar offenses often face civil lawsuits too. These civil cases are usually brought by the victims of the crime, the government or both, and seek to recover any financial losses caused by the defendant’s illegal actions. Any penalties awarded in civil court are in addition to the fines and punishments given in criminal sentencing court.

If you’ve been charged with a white-collar crime, it’s imperative that you contact an experienced criminal defense law firm as soon as possible to discuss your case, specifically a firm focusing on white-collar and nonviolent offenses. 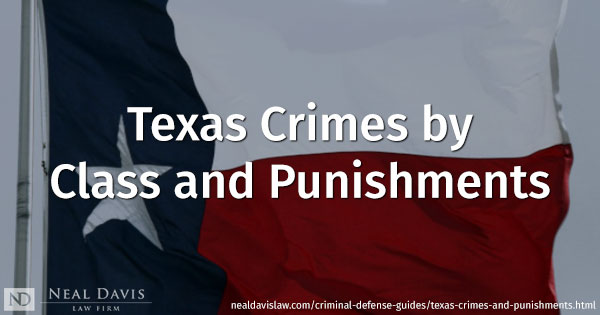 Texas Crimes by Class and Punishments

If you’ve been charged with a crime in Texas, you need to understand your rights. Learn about crime classifications and sentencing guidelines in Texas.

An appropriate punishment for a white-collar crime conviction is determined on a case-by-case basis and dependent on certain individual circumstances. These 5 main sentencing factors include the following.

What is the maximum punishment allowed by state or local sentencing guidelines? Judges use these federal guidelines and state laws to determine an appropriate penalty for any given crime. Most defendants can receive a lesser sentence when properly represented by an experienced white-collar defense attorney.

Does the defendant have a prior criminal record, or are they a 1st-time offender? Being a repeat offender—whether the past crime relates to the current charge or not—often results in harsher penalties from a judge. First-time offenders, on the other hand, may be able to negotiate for a lighter sentence.

Was the white-collar crime in question a misdemeanor or felony? Certain state and local guidelines regulate what penalties judges can give based on the seriousness of the offense.

For instance, a violent crime like homicide or aggravated assault will earn a much more severe punishment than a nonviolent or minor offense like shoplifting.

Did any mitigating circumstances play a role? Certain contributing factors may make a judge more lenient during sentencing, such as if the defendant recently experienced a major life crisis like losing a loved one or their job. The role the defendant played in the crime (whether they were the central figure or an accomplice), as well as if another person was injured due to their actions, may also be taken into account.

Is the crime attracting attention from the public or the media? Although the American justice system is supposed to uphold the law fairly, societal pressure often plays a role in criminal cases.

For example, judges, law enforcement and elected officials want to appear harsh on certain crimes (like child pornography or drug offenses); therefore, they may apply stricter punishments to these offenders than is necessary.

The challenge of sentencing white-collar crimes

While judges use federal and state sentencing guidelines to determine an appropriate punishment for a white-collar offense, these guidelines are increasingly being called into question by lawmakers and bar associations for being unfair and, in the words of one federal judge, “just too goddamn severe.” People on the other side, however, say white-collar sentences are too lenient and that white-collar criminals “get off easy.”

Something both sides can agree on is that current federal sentencing guidelines are overly simplistic, resulting in white-collar offenses and penalties often not matching the crimes.

Get an experienced white-collar defense lawyer

Clearly, if you or a loved one living in the Houston area faces a criminal charge for a white-collar crime, you must secure the best white-collar criminal defense lawyer you can find. Your freedom, your reputation and your financial well-being may depend on it.

The Neal Davis Law Firm has received many honors for its handling of white-collar crime cases. Based on peer reviews, Neal Davis has been named among the top 5 percent of America’s defense attorneys for white-collar crimes by Best Lawyers in America each year since 2015.

Persons living in Houston, Conroe, The Woodlands, Sugar Land or elsewhere in Harris County, Montgomery County or Fort Bend County can contact the Neal Davis Law Firm to arrange a consultation for a white-collar crime case.