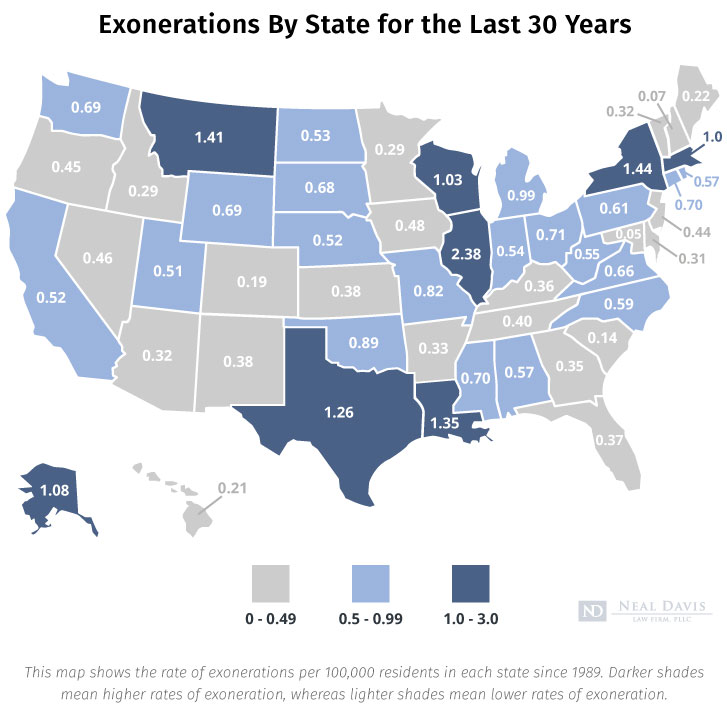 The problems of mass incarceration and wrongful convictions are ongoing issues in the United States.

The good news is that exonerations have risen nationally in recent years. However, there’s still a lot more work to do to ensure falsely convicted Americans get justice.

To get a glimpse into the state of wrongful convictions, here at the Neal Davis Law Firm we recently analyzed data and generated a comprehensive report for readers about exonerations by state. This report details the growing trend toward reversing wrongful convictions by exonerating and setting free individuals who have been unjustly placed in America’s overcrowded prison system.

The report includes lists of the best and worst states for exonerations, as well as wrongful convictions by state and the types of offenses. The report also features substantial research into the process, and reveals the motives and means behind exonerations — not to mention the effects of racial bias on imprisonment and how the #MeToo movement has spurred false sex crime claims.

“Challenging faulty evidence and poor witnesses is often a key when pursuing exoneration,” says veteran Houston criminal defense lawyer Neal Davis. “I’ve had to do this many times to fight the conviction of a client who later was granted a new trial.”

The report also describes the imperatives of death row exonerations and why criminal defense lawyers are needed to protect the legal rights of those who have been unjustly convicted and imprisoned.

In our report, we provide maps and lists to help breakdown exonerations by state and show which states provide the most compensation or restitution for individuals upon their release.

For example, did you know that Texas, though its known as a state that’s tough on crime, leads the nation in number of exonerations and even offers those who were wrongly imprisoned $80,000 per year of imprisonment?

You’ll find all that and more in our report, which also features statistics on wrongful convictions in the United States, the reasons behind them and what can be done about the problem. View the full report right here: https://www.nealdavislaw.com/criminal-defense-guides/exonerations-by-state-2019.html

The Neal Davis Law Firm is proud to provide thought leading research and information. And if you need legal help, contact us today for a legal consultation for your case.