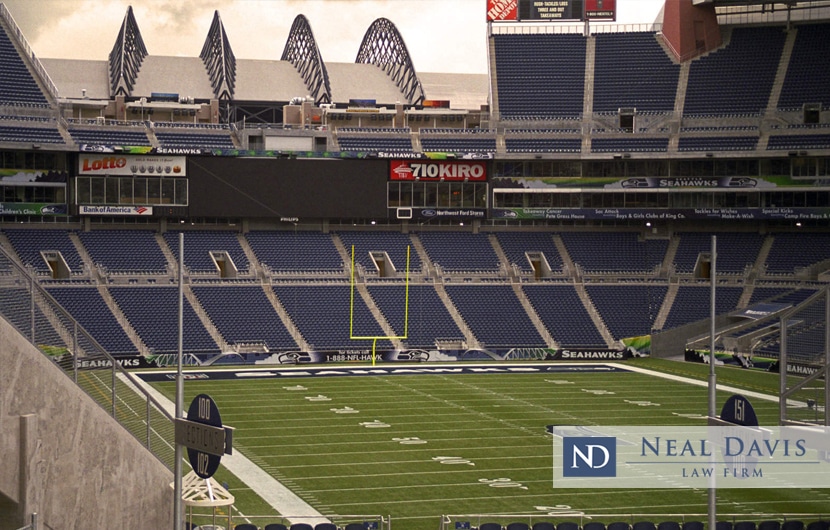 The manner in which King County, WA authorities have handled the felony burglary domestic violence charge and 5 misdemeanor charges against NFL star Richard Sherman may prompt some people to wonder if he received preferential treatment.

Sherman was arrested in Seattle on July 14 after his wife made a frantic 911 call when he reportedly tried to break into his father-in-law’s home.

He was held without bail but later released. King County District Court Judge Fa’amomoi Masaniai called him a “pillar of the community” and said he was being released due to this being his first arrest.

Sherman’s initial felony burglary domestic violence charge was dropped. But he then was charged with 5 misdemeanors, reports the Seattle Times.

In a hearing, Sherman pleaded not guilty to all 5 misdemeanor charges.

For those charges, District Judge Lisa Paglisotti released him on his own recognizance, but she issued restrictions on driving, drug use and weapons possession.

In order for him to remain free on his own recognizance, she also told him to stay away from 2 Washington State Department of Transportation workers who identified him to law enforcement and to only have cordial and necessary contact with his father-in-law, who reportedly pepper-sprayed Sherman on the night of his arrest.

The judge also lifted a no-contact order which had been issued when he was arrested. She then ordered Sherman to appear Aug. 13 for a pretrial hearing in Redmond District Court.

Sherman, who is 33 and a free agent, made a public apology and cited mental and emotional “personal challenges” with which he is dealing. He also has shown remorse and contrition on social media, saying on Twitter that the “importance of mental and emotional health is extremely real and I vow to get the help I need.”

Such contrition or remorse can be an important factor aiding defendants in criminal cases or helping convicted persons who face a parole hearing.

Some charges against Sherman remain

Though Sherman has no criminal history and is doing his best to defuse the situation, the misdemeanor charges against him remain.

All stem from an incident in which he reportedly crashed his vehicle into a highway construction site, left the scene and later tried to break into his in-laws’ home. When police arrived after the 911 call made by his wife, Sherman reportedly fought with police officers before he was arrested and taken to jail.

Yet soon afterward, he was hailed by a judge as a “pillar of the community.”

You may need a criminal defense lawyer

A person without the fame and resources of Sherman may be less likely to receive the same lenient treatment from authorities after such incidents. That doesn’t mean Sherman didn’t deserve receiving lesser charges or being released. However, an average person facing the same situation may have had a tougher time getting such treatment.

That is why, if you face a misdemeanor or felony criminal charge, it is vital that you engage a skilled and experienced criminal defense lawyer who can fight for your legal rights.

Persons who face a criminal charge in Houston, Sugar Land, The Woodlands or elsewhere in Harris County, Fort Bend County or Montgomery County can contact the award-winning Neal Davis Law Firm to arrange a consultation for their case.