Interrogated by a Police Officer? What You Should Know

Have you been interrogated by a police officer? Or do you need to know your rights, in case you are questioned by police? If so, here is what you should know.

By law, police can stop you to ask questions if they have a legitimate reason to believe that you were involved in a crime. At that point, police have a legal right to ask you many things which could establish your connection to a crime.

But also by law, you don't necessarily have to answer all of these questions.

When You Must Answer Police

So, when must you answer police? That's simple: You only must answer when police ask you for your name. Otherwise, you have a right to decline answering questions thanks to the Fifth Amendment of the U.S. Constitution. This right applies whether a law officer is federal, state or local.

The Fifth Amendment protects you against self-incrimination, or stating things which could expose you to a criminal charge or criminal prosecution. Other than your name, you need not give police any other information thanks to this protection.

What Are My Miranda Rights?

You also may wonder "What are my Miranda rights?" These are the rights you often hear stated in movies and on TV when police make an arrest. Also known as a Miranda warning, your Miranda rights stem from the 1966 U.S. Supreme Court case Miranda v. Arizona. It established Americans' right to remain silent when being interrogated by police.

This right to silence protects you from saying anything which could hurt your case. For police, it preserves the admissibility of any statements which are made by a suspect in custody when the time comes for criminal proceedings. In other words, if you understand your Miranda rights but incriminate yourself anyway, such incriminating statements are admissible as evidence.

In effect, a Miranda warning is a legal process for making sure that a suspect knows about his or her Fifth Amendment right to avoid self-incrimination.

Actually, police are not required to inform suspects of this Fifth Amendment right by issuing a so-called Miranda warning. However, if police fail to issue such a warning, anything you say cannot be used against you in a criminal proceeding.

Even so, it's best that you try to avoid self-incrimination, whether or not police give you a Miranda warning.

A standard Miranda warning is:

Can Police Trick Me Into Answering?

You may wonder, "Can police trick me into answering?" In some cases, they can. In fact, police can lie to you to get you to admit guilt.

One trick by police at a traffic stop is to ask, "Do you know why I stopped you?" And here's the trick: If you answer "No," the officer may write on a ticket "Driver wasn't aware of running a red light." But if you answer, "Did I run that red light?", then you've essentially admitted guilt.

So what should you say when asked this question? You should politely say, "Please tell me why you stopped me, officer." 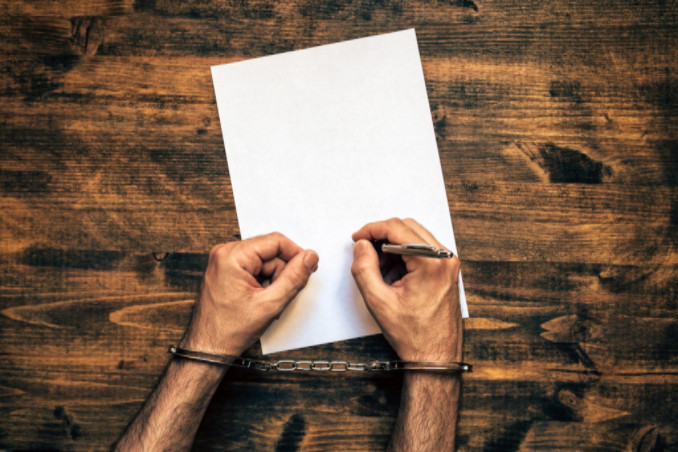 Police also can lie and say "If you won't answer our questions here, we can take you to the police station." Actually, they can't - at least, not without arresting you. So you don't have to say anything if you haven't been arrested.

Police also may claim that if you don't answer questions, it is "obstruction of justice." That is not true. You have every right not to answer questions which could incriminate you.

Or police may lie and tell you that if you didn't do anything wrong, you have nothing to worry about, and you can answer their questions freely. That is not true, since anything you then say can be used against you. And if police truly believed you did nothing wrong, they wouldn't be interrogating you in the first place.

Despite all this, there are many things police cannot do to trick you into answering questions.

Police must obey boundaries - boundaries which an experienced defense attorney will know.

As for whether police can take blood or DNA samples from you as evidence to use against you, police do have that right. Fifth Amendment protections only apply to communication, and not to collecting physical bodily evidence.

What If Police Interrogated Me Illegally?

If you've already been questioned by police and believe they may have interrogated you illegally, contact veteran Houston defense attorney for help. Neal Davis has represented hundreds of people like you - people who need protection when police have ignored their legal rights in interrogations or otherwise.

With his knowledge and experience, Davis can determine if a police interrogation exceeded the boundaries of your constitutional rights. Neal Davis can fight to have a charge reduced or even eliminated if police have overstepped such boundaries.

Remember what the Miranda warning says? "You have the right to an attorney." But it's important to choose the best criminal defense attorney to handle your case - an attorney with the skill to defend you to the fullest.

Whether you face a criminal charge for a sex crime, online solicitation, drug possession, DWI or other criminal offenses in Houston, Harris County, Montgomery County or Fort Bend County, get Neal Davis to protect your legal rights.