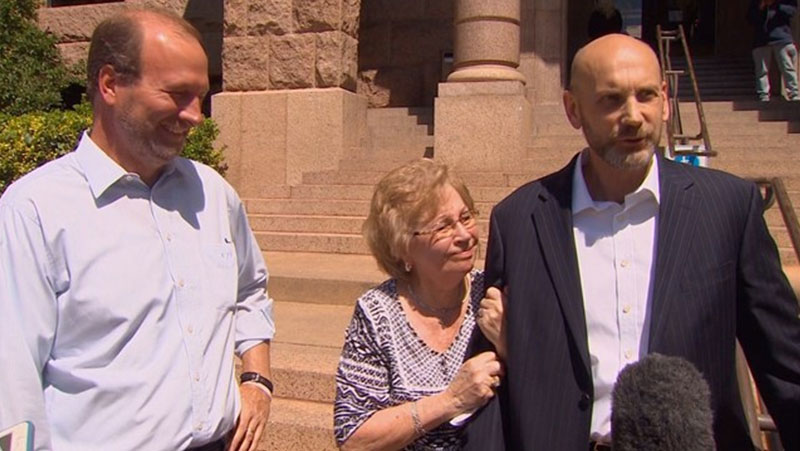 FORT WORTH -- A former Fort Worth police officer who served 21 years for the rape of a child took a step toward freedom Thursday morning.

And, he hopes, a step toward clearing his name.

Brian Franklin’s shoes waited so long for this walk, one sole fell off as he emerged from a Tarrant County probation office out into bright sunshine. He raised his hands and shouted, "Freedom!"

Franklin didn't care about his feet. He finally had his family.

His 82-year-old mother clung to his arm.

"She's supported me all this time," he said. "The very least I can do is support her."

For 21 years, his mother, Irene Franklin Taylor, held her tears so her son wouldn't see her cry during prison visits.

"We had knots in our stomach when we would get there,” she said. “It was really hard to leave."

She patted his arm and dried her eyes.

Brian Franklin is a former Fort Worth police officer serving life for the sexual assault of a 13-year-old girl.

He's getting a new trial because the victim admits lying in other parts of her testimony. But she says she did not lie about the attack.

Prosecutors had physical evidence of sexual assault, but no DNA evidence to bolster the case.

"I've taken and passed polygraphs,” Franklin said. “What else can I do?"

Franklin was offered freedom two years ago in exchange for a guilty plea. He refused.

He wore his brother’s blue suit It hung on Franklin’s thin frame, hiding a leg monitor. He's out on $10,000 bond.

Prosecutors plan a retrial. The victim, now approaching middle age, could have to testify again.

Her son hugged her.

Franklin’s father died while he was in prison. His brother Paul wore his father’s monogrammed shirt Thursday to represent the memory.

Brian Franklin says he won't rest until he's fully exonerated. He says he has no fear of a new trial.

For now, he's enjoying his first taste of freedom. His family brought him cookies.